RSS
← Are you halfway there?
The other side of COMPLAINING. →

The Epitome of a StepDaddy!

moving up to high school

“Excuse me Scott, are you married?”

“Good, cause my mommy needs a husband”

This was the conversation nine years ago when my now husband came to my house to have dinner with me and my daughter for the FIRST time. The ground could have opened up and swallowed me whole! And all I could muster to say was “I did NOT tell her to say that!”

Katana was only five years old at the time and I managed not to choke on my homemade macaroni and cheese, broccoli and fried chicken….I still remember the exact meal 🙂

I was a single mom at the time, having gone through a divorce from her biological father. I was dealing with all the emotions that comes with. I did not want a failed marriage. I did not want to be a single mother……didn’t want to be a stereotype. But I had a good career and I was determined to thrive and ensure that she did as well. Plus there was no need to dwell on what ‘didn’t’ work….it was what it was.

When Scott came into our lives, it was a while before he met Katana. I just believed that adults need to decide what they are going to do before children get involved. From the moment they met they have always had a very special connection. I saw it with him and I also saw she had the same connection with my father….her Papa.

Weird to say, but I felt as if I could give her everything within my power but I could not give her that connection or that special bond girls have with their father. She loved her Nana, but she looooved her Papa.

I don’t even know if it is articulable because both my sister and I are daddy’s girls.

Anyway, Scott came into our lives and from day one (even as we ironed out the dynamics of our relationship), he was there! To give piggy back rides, pick her up from school, play video games, eat dinner, watch the first tooth get pulled, watch her ride her bike in ‘speed mode’ and fall and chip a tooth. To celebrate birthdays and every holiday, to be there for graduations and special events and to share their own father daughter dance at our wedding 5 years later 😉

I guess she called it!

Well a few weeks ago we had a student led parent teacher conference and as we were waiting in the hallway I noticed that Scott had this weird look on his face. I was down the hall browsing the school photos taken intermittently through out the school year. He was over at the section that said “My Hero”.

I remember the assignment because she had mentioned to me about having to write about someone who was a HERO to her; someone in history, movie star, dead or alive etc.

Well, little did I know, her hero was her dad, Scott.

Moving up to Middle School

Hanging in the hallway was her assignment. I did not realize how eloquent this child was, and it brought tears to his eyes to hear in her words what he meant to her.

It did my heart good!

She eloquently described the journey through her eyes and they are now framed and on his desk!

These are the words that touched me the most:

“Scott has had such a grand impact on my family, and especially me. I am so thankful that he met my mom and am so grateful that he is my Dad. I want him to know that even though he is my step dad, it doesn’t change his authenticity, because he is the best DAD that anyone could ever ask for”. 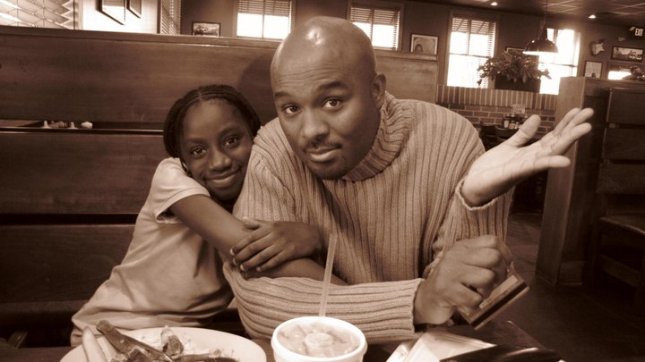 ← Are you halfway there?
The other side of COMPLAINING. →

11 responses to “The Epitome of a StepDaddy!”