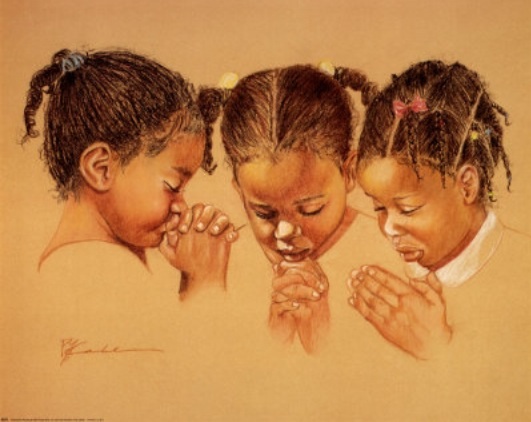 So in my quiet time yesterday morning, I asked God for the fodder for my next post. Usually I could feel it brewing already, see the illustrations, the exact photos to use and the word flow……what did He want me to share?

Two weeks ago my coworker and I stopped at a nearby Target because I wanted to get a plaid shirt for a possible trip to the rodeo. We were joking around about getting the hat and boots to complete the ‘cowgirl’ look but as we approached the Express line, my eyes were immediately drawn to the face of the cashier and my joking words trailed off. She didn’t look right; she looked like she was in pain. My eyes honed in on her and I asked “How are you?”.

She said “I’m good”. Trying her best to mirror that statement.

With my eyes still intently on her face I said quietly “You’re in pain aren’t you?”. It seemed like we were in a vaccuum, and she said “Yes, it’s my back”.

All of a sudden the vaccuum went away and I became immensely aware that I was in uniform, in the front of Target, in the Express line with people waiting in line, and my coworker besides me. And I thought to myself ‘Lord, please don’t have me pray for this lady right now’.

I quickly got the bag with the plaid shirt and left; missing a Golden opportunity to be used by Him.

So today as I was teaching noon bible study, wrapping up Acts chapter 2, we were talking about Peter’s bold address at Pentecost. A young visitor brought up Peter’s healing of the man at the gate called Beautiful (Acts 3:1-11). God led me to share my experience.

Where was my “silver and gold have I none, but such as I have I give to thee; in the name of Jesus, get up and walk”?

Oh the transparency of my walk…..I asked HIM for another chance 😉

Posted by JC on March 6, 2014 in Daily Inspiration, Prayer

The Simon and Peter in us!

This week I was given the honor of being a guest blogger for the lovely Marlene over at Journey of Joy.

I’d love for you to hop over and check out my post The Simon and Peter in us!, which talks about pursuing our purpose and staying on course in the face of life’s many failures.

While you’re there check out some of Marlene’s stuff too, especially her Anthem, which truly blessed me from day one 😉

You will be blessed!

Fishing in the Surf… 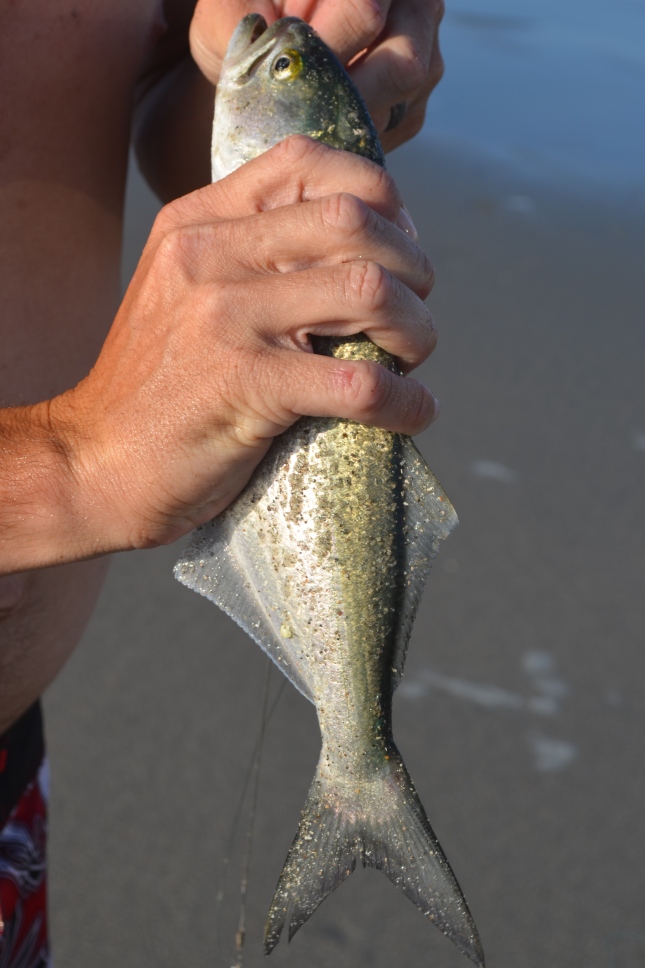 This past weekend my husband and I went away to North Myrtle Beach for our anniversary. I brought along my neon pink and green jazzy running shoes to get a run or two in on the beach. Ever the early bird, my eyes popped open of their own volition at about 6:30 the first morning. I jumped up, laced up, grabbed my camera and went out to capture the sunrise. The plan was to get a few shots, bring the camera back and go for the run. 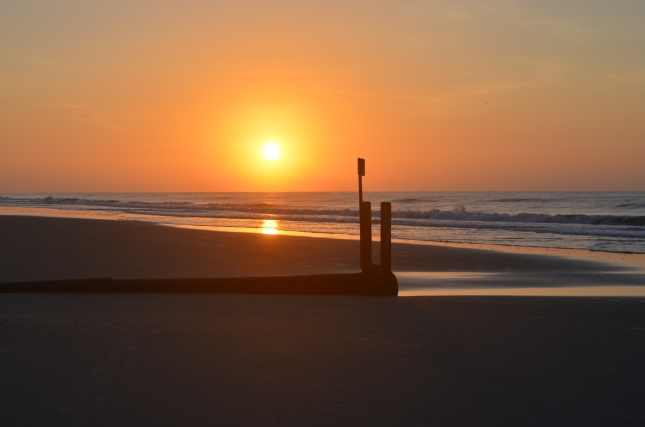 As I was tracking the sun’s movement with the other early birds, I looked over and saw a man throwing his net a little further out in the surf; fishing. I ambled over to him and became fascinated with what he was doing. In his net were about fifteen mullets. To my untrained eye I thought they were decent size, but he said they were just his bait. I assisted as he tried to get them in his bucket of water; they were jumping everywhere! 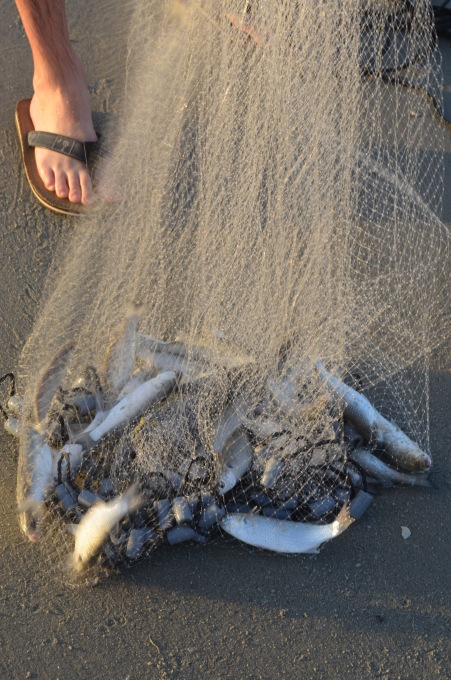 He then hooked the live mullets to his fishing pole and threw it out. A few minutes later he pulled in his catch; a blue fish. The bait was in his belly, the hook was in his mouth. The man unhooked the blue fish and threw him back in. The salt water would heal the damage from the hook he said. He repeated the process again. This time he put two live mullets on there saying ‘big bait big fish’. A couple minutes later, an even bigger blue fish. I hung around ‘helping’ out, picking up a fish or two; my morning run long forgotten. 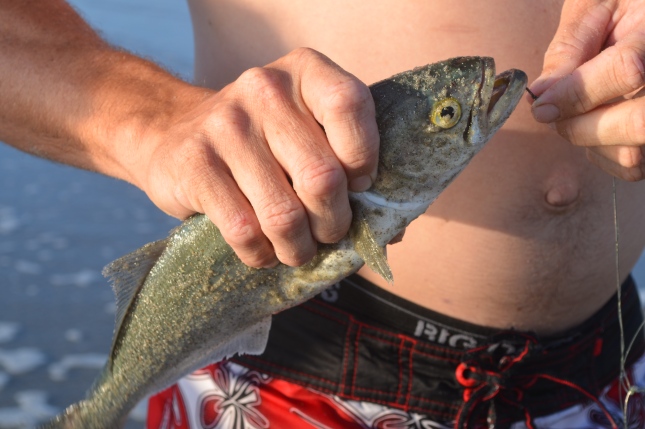 As I headed back in, I was deep in thought as I watched the baby fish and crabs washing in with the waves and scurrying back to the relative safety of the ocean. I was thinking about when Jesus called Peter (Simon) and Andrew in Matthew 4. He told them he would make them fishers of men. That thought stayed with me as my husband and I enjoyed the rest of the day. 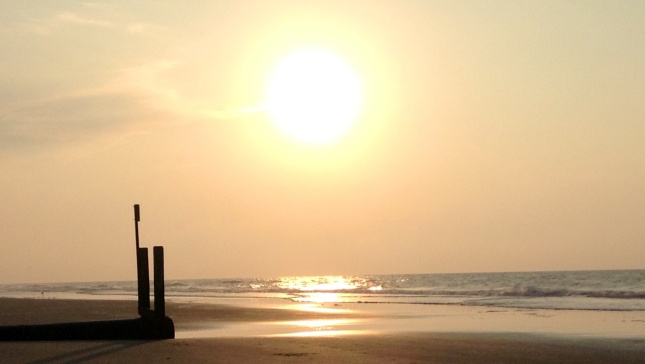 The next morning I didn’t even bother with the sneakers, I donned some water shoes and headed out. Cool breeze, enjoying the majesty of the ocean, I saw the fisherman again; same time same place. He was casting his net but coming up empty. No bait no fish. So he packed up and went in. I drifted a little further down the beach and as I came back, there was a father and son team, fishing in the same spot. They were reeling in some smaller catch.The dad told me all about it; there were pompano, whiting, blue fish and pin fish. 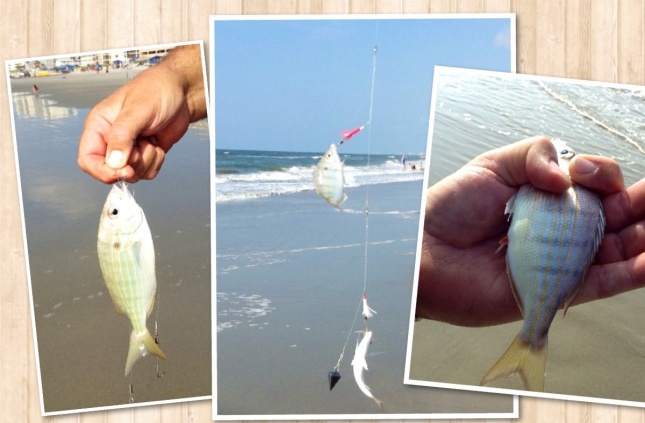 They didn’t have live bait, they brought blood worms, squid and shrimp as bait. I watched how they held the fishing pole, how they held the string so that they knew when a fish had taken the bait, yanking it and reeling them in. If they didn’t feel the movement and respond immediately, the fish would take the bait and shake themselves off the hook.

The whole process took patience and they never knew what fish would take the bait. Preparation was also paramount. They had the right equipment and I especially liked the fisherman who came out extra early to catch his bait, because bigger predatory fish are more attracted to smaller live fish.

We are to be fishers of men, using the word, our testimony and the example of our life as bait. One good taste is all someone needs to see that God is good. Even if they don’t come or they ‘get away’, like the fish that got off the hook, the bait is still in their belly. As we interact with others we have to be sensitive and discerning to know when the bait is working. We can’t be lazy, procrastinate and not follow through; we let people off the hook when we do this. 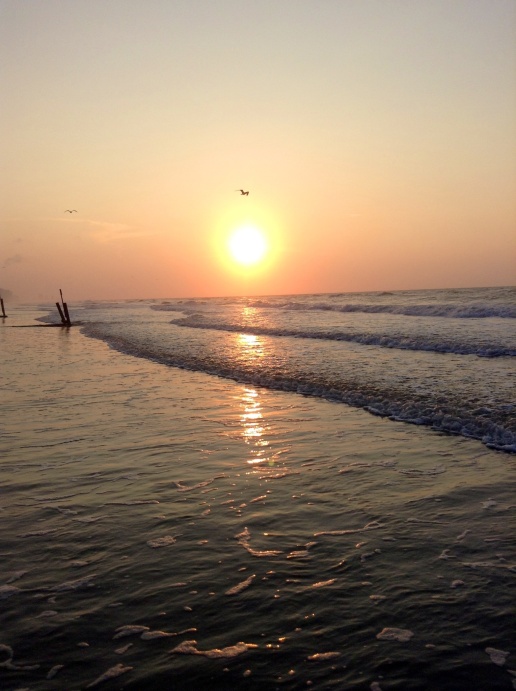 I pray this will be bait for someone to get moving; we can’t let the ‘fish’ off the hook 😉

Posted by JC on September 3, 2013 in Daily Inspiration