This morning I was up early because I wanted to enjoy God in nature before I made it to our worship service. I went to the greenway near my house an hour or so later than I usually do. You see, a week ago, a female runner reported that she was attacked at knifepoint by some guy hiding in the woods and he tried to drag her in the woods. She kicked him in the ‘you know what’ and took off running. Anyway, I came out an hour later and decided to ditch the iPod and take my phone.

There is just something so serene about early morning that is very relaxing to me. I really think it’s the freshness of a new day. A fresh chance to do it again…a fresh dose of new mercy 🙂

I passed a familiar walker, his usually walking partner replaced with a beautiful stick. “No dog today?” I asked. “Unfortunately, we had to put him down” was the reply, “thanks for asking.”

There was a squirrel running off with an acorn as big as her head….scurrying away before I could snap the moment. Preparing for winter I guess. And deer…yes, they were enjoying the early morning too. 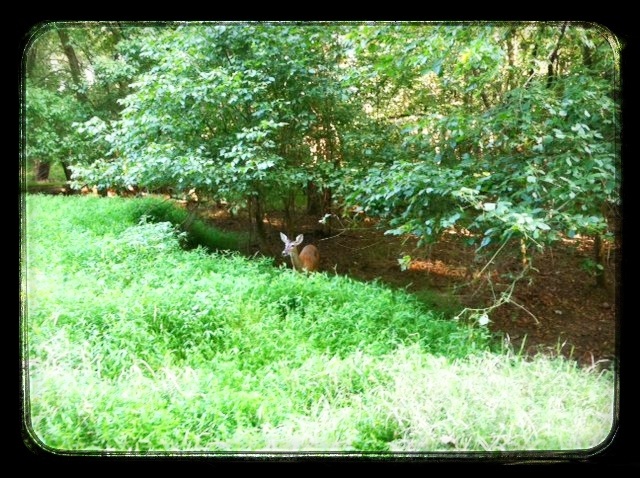 Untrustingly checking me out, but too lured in by the lush dewey grass to be thwarted by us two-legged intruders. I saw a total of three mamas with their spotted babies nearby.

I inhaled deeply, imagining my lungs filling with nice clean fresh air. So enjoying the moment that my intended three miles turned into four. Passing walkers, runners and bikers, all giving briefs nods and smiles. And all seemingly enjoying the outdoors as I was. A mom ran by, pushing a double stroller with chubby twins, one intent on tasting his toes.

A little past the one mile marker was another doe…this one lying in the woods waiting for us to move on down the road.

Some trees were already getting undressed. Their leaves littering the greenway. Having a few more weeks to complete the shedding before winter caught them unprepared. Mrs. Spider displayed some beautiful handiwork, glistening with dew and early morning light…

I couldn’t help but look at all these creatures and trees doing what they were supposed to do; with no instructions. No self help books, no pep-talks, no motivational speakers…Some might argue that they do have instructions. Internal hard drives called Instinct. But so do we…are we as busy and proactive as they are? Preparing now for what’s to come? I dare say, they have less intellect and rely more on Instinct…and we have more intellect and rely less on Instinct and the proddings of the Holy Spirit.

Anyway, just my thoughts on today’s morning jaunt…glad I had the phone after all 😉

May your week be a blessed and productive one.

Stories about love to restore hope in people's hearts

The blog of Bryan Davis Photography